The vagus nerve is the longest cranial nerve in the body and derives its name from the Latin word meaning “wanderer”. It carries a bundle of nerve fibers stretching from the neck to the pelvis and innervates the organs of the thorax and abdomen. It has many functions including regulating airway diameter, gastric motility,  and more recently has been linked to anti-inflammatory mechanisms and female orgasm.

Cardiovascular vagal receptors arise from the heart and lung. When blood pressure increases, they become active, sending a stream of information to the brainstem. Together with similar signals coming from the glossopharyngeal nerve, the brainstem uses this information to precisely control blood pressure to bring it back to normal levels. The vagus nerve is telling us how we feel, and when activated has a calming and restorative effect. It puts the brakes on sympathetic activity flowing out to the heart and blood vessels and at the same time, powerfully slows the heart.

Over the years, Dr. Norcliffe-Kaufmann has studied several disorders that affect the autonomic nervous system and the vagus nerve. Her research led her to focus on two diseases that have deficits with vagal nerve function. Although they have vastly different causes, it seems that they both lead to heightened states of sympathetic arousal at times of emotional or physical stress.

In 2010, Dr. Norcliffe-Kaufmann and her husband made a startling discovery while studying patients with familial dyautonomia. The rare genetic disease, which originated in European Jews in the 1500s, results in a congenital neuropathy preventing some of the cranial nerves from developing. Using clinical assessments of the baroreceptor pathways they were able to show that patients had no ability to sense and control their blood pressure.   The hallmark feature of familial dysautonomia is hypertensive vomiting crises, which occur when the patient is fearful, angry, excited or ill. They can’t suppress their blood pressure from surging. At a very basic level they appear to have little if any vagal nerve function, they can’t sense what’s going on with their blood pressure, so they can’t fix it.

As a consequence, the heart and organs are no longer protected against hypertensive surges. If left unchecked, the heart muscle can start to come under strain during a hypertensive crisis because of the build-up of adrenaline-like hormones.

In many ways, parallels can be drawn with takotsubo cardiomyopathy, more commonly known as stress-induced broken heart syndrome. As we age, our vagal nerve activity to the heart decreases. Takostubo cardiomyopathy is a mysterious disorder that affects mostly post-menopausal women. The symptoms of takotsubo mimic a heart attack, but rather than a blockage, the heart balloons into an odd shape, which resembles a Japanese octopus trapping pot.

For several years, in collaboration with Dr. Harmony Reynolds at NYU, Dr. Norcliffe-Kaufmann has been studying the autonomic nervous system in the aftermath of a takostubo episode. Most women recover and it seems that their heart is temporarily stunned because it is flooded adrenaline-like hormones due to excessive sympathetic nerve activity. At that time, studies on women with takostubo had largely ignored the vagus nerve. We just weren’t looking at it, explained Dr. Norcliffe-Kaufmann, we assumed takotsubo was all the fault of an overactive sympathetic response.

Embarking on a careful study of autonomic function in women with takostubo took years, but led to the finding that these women had very little vagal influences over the heart. Normally, when you breath in and out, heart rate fluctuates, so that it slows down as you begin exhaling. If you breath at 6 breaths per minute (5-seconds in, 5 seconds out) vagal activity to the heart should be maximized. Continue this for a minute or more and you start to feel calmer. But in women with takotsubo, these heart rate fluctuations were very diminished, suggesting they too had low vagal activity.

While it seems logical that vagal 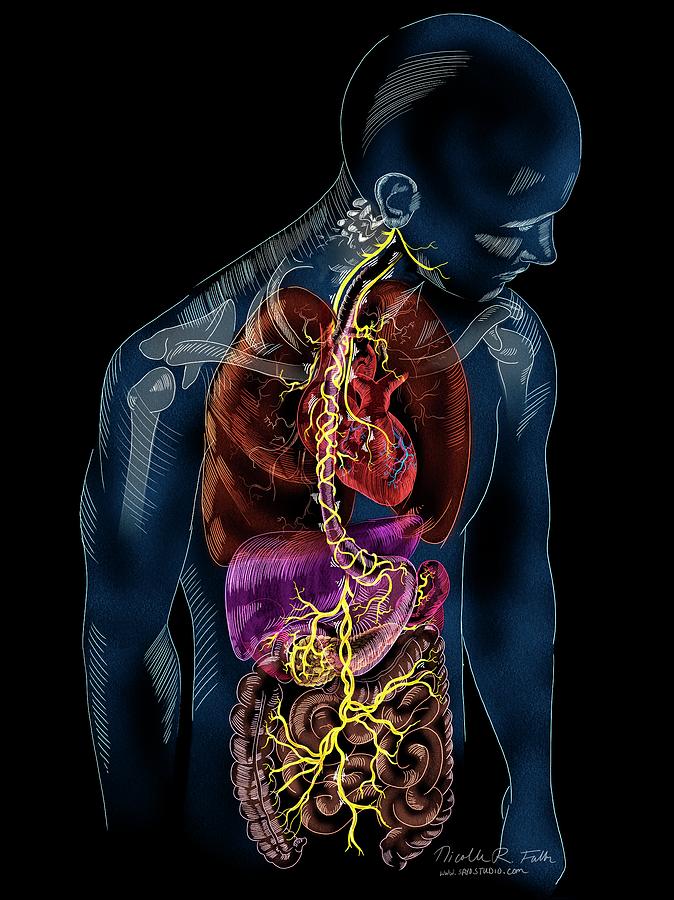 dysfunction might lead to heightened states of sympathetic arousal, it remains an active area of research. What we do know is that we all have a flight or fight response and emotions can have a powerful effect on the heart. If the vagus nerve can’t communicate with the brain or can’t oppose sympathetic activity and slow the heart, our fight or flight response can continue without restraint.

These two disorder illustrate that concept, explained Dr. Norcliffe-Kaufmann. The vagus nerve appears to be very important in maintaining a state of calm and is probably good for our well-being.

Dr. Norcliffe-Kaufmann was a guest speaker at International Conference on Clinical Neurophysiology in the Brainstem Special Interest Group. Her work was featured on the front cover of the Journal of Clinical Neurophysiology’s special edition on brainstem disorders. She is the Associate Director of the Dysautonomia Center and NYU Langone Medical Center.

iThere are no comments